END_OF_DOCUMENT_TOKEN_TO_BE_REPLACED

It’ll quite a star-studded week, Michelin Stars that is, for foodies and epicureans next week, Chefs from two 3-Michelin star restaurants will be cooking up a tasty storm in Singapore.  Christophe Muller from Paul Bocuse’s legendary L’Auberge Du Pont De Collonges and Quique Dacosta from the modernist Quique Dacosta Restaurante will be here in Singapore on 16 and 18 September respectively.
END_OF_DOCUMENT_TOKEN_TO_BE_REPLACED

As local as the name “Tiong Bahru Bakery” may sound, it’s definitely not your typical neighborhood bakery a la Swee Heng. You’ll not find a picnic ham and cheddar single bun, instead you can find a turkey ham and emental cheese sandwiched between a black squid ink bun.

To give a little backgrounder on Tiong Bahru Bakery, it is headed by Gontran Cherrier who is one of the top bakers in Paris.  The joint partnership with Spa Esprit group opened their flagship store in, well you’ve guessed it, the indie, rustic neighborhood of Tiong Bahru.  Raffles City is their second branch and a third branch is set to open sometime in November.

Me and two other friends were having lunch at Raffles City when we decided to sit down at Tiong Bahru Bakery for some desserts. We ordered a Berry Crumble and a Lemon Curd Tart to share among ourselves

At $6 a slice, the Berry Tart was really worth it for that pricing. The berries were sourish, which cut into the sweetness that came from the rest of the pastry. It wasn’t exactly sickeningly sweet but for that size, I don’t think i can gobble down the whole crumble without feeling queasy. Other than that, I found this pastry rather pleasant.

However, the Lemon Curd Tart didn’t quite hit off with me. I like the acidity of the lemon curd but at the same time, the ‘eggy’ taste was slightly overshadowing the dessert. I’ve had lemon curds that has the silky smooth taste without the distinctive egg flavor. This one just wasn’t it.

Nonetheless, Tiong Bahru Bakery does give its best when it comes to artisan breads. I’ve only able to try these two desserts at the branch so it’ll be unfair for me to pass a verdict base on that.  I will especially look out for their danishes and the croissant that has garnered so much positive reviews. 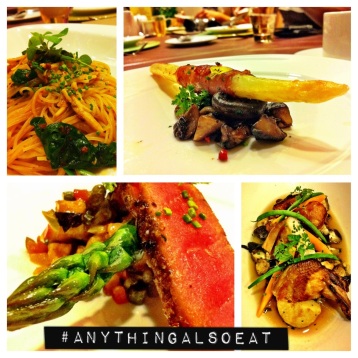 I have been to Illuma a couple of time but never once I went to roof level. Being the sua-gu (Hokkien for Mountain Tortoise, to describe someone unlearn or ignorant) that I am, I was pretty amazed that there is a restaurant up there.

Chef Daniel’s Kitchen recently went through some minor renovation work. It is now elegant, classy with a touch of mod to it. But the restaurant is not the only thing that is new, Chef Daniel has also prepared a new menu.